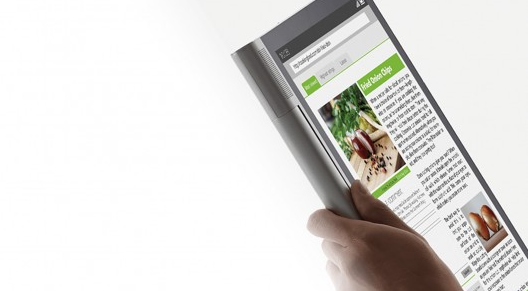 Following on the heels of today’s Yoga 3 Pro announcement, Lenovo also unveiled several new Android- and Windows-based Yoga tablets: two 8-in tablets (one Android, one Windows), two 10-in tablets (same deal) and a 13-in Android tablet with a built-in projector.

The tablets have (roughly) the same form factor as last year’s mid-ranged Yoga Android tablets, which means you’ll find a cylindrical bulge sitting on one side of each slate. That cylinder houses a battery (with unknown capacities) that Lenovo says will last up to 18 hours for the 8-in and 10-in Android versions, and up to 15 hours for the other models. Like the old versions, the cylinder doubles as a grip to better hold the device with one paw.

Those numbers are well off the pace set by Samsung’s Galaxy Tab S and Apple’s iPads, but it’s movement in the right direction.
Now that Lenovo’s cylindrical bulge design has been around for a year, the most eye-catching feature is that built-in Pico projector in the 13-in Yoga Tablet 2 Pro. It can project up to a 50-in display (no word on resolution) onto any wall or ceiling in a dark room. If done well, the projector could turn the device into a makeshift home theater, or perhaps, in a pinch, help out with presentations. If not done well, then it’s a lot harder to see any standout features here.

Back to the build, the Yoga brand takes on a different meaning in these tablets than it does in tablet/laptop 2-in-1s. Here there’s a small stand that folds out of that cylinder, letting you stand the tablet up (almost) upright or lay it down on a more horizontal angle. But this time around, Lenovo added a new mode: hanging. That’s right: with a big square-ish hole in the middle of the kickstand, you can hang the new Yogas on something like a wall or bedpost.

The three Android tablets run 4.4 KitKat, while the two Windows variants run Windows 8.1 (that’s full Windows, not the limited RT). The 10-in Windows model even includes a Bluetooth keyboard, to squeeze a bit more work out of it. And owners of the 10-in Android tablet can buy the same keyboard to use with their slate.

All five tablets have Intel Atom Z3745 processors inside (clocked at up to 1.86 GHz). That should give them a solid enough balance of performance and battery life, but also put them several notches away from the high-end.

The prices start at US$250 for the 8-in Android-running Yoga Tablet 2, and shoot up to $500 for the 13-in Yoga Tablet 2 Pro. Four of the five are available for pre-order now (we’re still waiting on the 8-in Windows variant), and are set to start shipping in about three weeks.

You can catch a quick tease of the Yoga Tablet 2 Pro’s projector in the video clip below.